We're sorry but the candle you have selected is currenty in the process of being purchased or has just recently been purchased.

Please feel free to select another candle or check back in 15 minutes to see if the candle you have selected has been released for purchase.

We're sorry but there are no candles available for lighting.

You have already begun a candle purchase session. If you would like to continue with your current candle choice please click "Continue" otherwise please click "Select Another".

In Memory of
Gertruda Hendrica "Truus"
Rijkers
1935 - 2018
Click above to light a memorial candle.

The lighting of a Memorial Candle not only provides a gesture of sympathy and support to the immediate family during their time of need but also provides the gift of extending the Book of Memories for future generations.

In the event that there is an error
in the information presented,
please contact the funeral
home by clicking here. 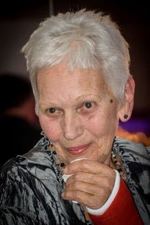 Truus was born in 1935 in Nistelrode, Netherlands, the third born in a farming family of eleven children. Her childhood was defined by hard work on the poultry farm and the hardships of World War II and the Occupation. Her first career, along with her sisters, was chicken sexing. After marrying Ad van Ineveld they divided their time between Italy and Holland, and enjoyed life with two daughters. Their home in Italy quickly became a favorite vacation destination and saw the beginning of Truus’s legendary hospitality. The marriage ended but her old flame, Martin Bertens, found her and enticed her to move to Canada with two young daughters in tow. Truus left her close family and life in Holland behind, and arrived in Winnipeg not knowing how to speak English. In her indomitable way, she cleared those hurdles and built a large and full Canadian life. Anneke was welcomed into the family.

Truus worked night shifts for over 20 years at the Manitoba Youth Centre where she was a Corrections Officer/ Youth Councillor and admired for her work ethic and firm but compassionate approach. She then flourished in retirement. Single again, Truus fulfilled her lifetime goal of having adventures. She travelled to every continent and many world wonders often with her intrepid photographer friend Mary Lou. She climbed mountains with highlights including the Annapurna Circuit in Nepal and Kilimanjaro at age 72. She was the definition of successful aging: she gathered even more friends around her, mastered Spanish, learned to fly a plane, loved Zumba, played bridge avidly and with a very competitive streak, became an accomplished ballroom dancer, volunteered, hosted hundreds of meals and helped her children and grandchildren.

The family want to thank her many visitors and those who sent the messages of support and love from around the world that made her last days so special, and in particular the support from Rose Marie, Mary Lou, Herman, Lia and Diane.

Flowers are gratefully declined, if friends so desire donations in memory of Truus may be made to Friends of Upper Fort Garry or the Cancer Manitoba Foundation.

To send flowers to the family or plant a tree in memory of Gertruda Hendrica "Truus" Rijkers, please visit our Heartfelt Sympathies Store.

This Book of Memories brings those affected by loss together by encouraging communication and self-expression. By giving friends and family a special place to tell their stories and express their feelings of loss, it helps them care for one another during a very difficult time. Click on any of the links to the right to access features or information within this memorial website.