To share your memory on the wall of Phyllis Harrison, sign in using one of the following options:

Phyllis was born May 28, 1921 in Elphinstone, MB. to John and Margaret Thompson. The family moved to Angusville, MB. and then to Belmont in 1927.
Phyllis moved to Winnipeg to attend Angus Business College in 1939. She was employed at British American Assurance Company until her marriage to Harold Harrison in 1944.
She and Harold lived in Nova Scotia and Quebec while Harold was in the R.C.N.V.R. They returned to Belmont at the end of the war as Harold was a partner in Harrison’s store with his father and brother. Their son, Kevin, was born in 1948. The family remained in Belmont until 1967 when the store was sold.
During her time in Belmont, Phyllis was active in the Community and Church, including the U.C.W., Order of Eastern Star, the local drama club and the Pelican Lake Yacht club. She loved their cabin on Pelican Lake.

Phyllis and Harold moved to Brandon in 1967. She was employed at the Brandon Public Library and the Western Manitoba Regional Library. Harold was the Assistant Secretary Treasurer at the Brandon School Division. Phyllis was active in the UCW at Knox United Church, the IOWE and Brandon University Women’s Club.

Phyllis and Harold retired to Winnipeg in 1986 to be closer to family.
They both loved travel and exploring new places. Their travels took them to England, Scotland, Ireland, all of Canada and most of the USA.
Most winters were spent in Florida, Arizona and (later) Victoria. While away, Phyllis always managed to find a class or two to continue painting in oils or watercolors.
After Harold’s death in 2002, Mom joined the River Osborne Community Centre Walking Group where she found friendship and support. She moved from their condo in 2008 to Boulton Retirement Residence, joined the Refit Centre and again made many new friends and enjoyed their camaraderie while exercising.

Mom moved to the Brightwater Senior Living of Tuxedo in 2107 where she remained until her passing. Our heartfelt thanks to the wonderful staff in both the “Garden” and then the “Arbour” when she required more care.

In honour of her wishes, no service will be held other than a graveside family gathering at a later date.

In lieu of flowers, donations may be made to a charity of choice.

The tide recedes, but leaves behind bright seashells on the sand. The sun goes down, but gentle warmth still lingers on the land. The music stops, and yet it echoes on in sweet refrains. For every joy that passes, something beautiful remains.
Read Less

To send flowers to the family or plant a tree in memory of Phyllis Margaret Harrison, please visit our Heartfelt Sympathies Store.

Receive notifications about information and event scheduling for Phyllis

Print
Cremation will take place, and there will be no service.

We encourage you to share your most beloved memories of Phyllis here, so that the family and other loved ones can always see it. You can upload cherished photographs, or share your favorite stories, and can even comment on those shared by others.

Posted Mar 08, 2021 at 05:03pm
Our sincerest condolences to Kevin, Evie and family . One of my favorite memories of ‘aunt Til, is the day she and Uncle Fuzz got married . As a nine year old, I thought it would be fun to tie a bunch of tin cans to the back bumper of the 1939 Plymouth car that they would be leaving in after the reception . Uncle Fuzz and Aunt TIL shared that story many times with us over the years ...apparently, the racket from the cans scared then ...they thought the car was breaking down until they realized what the noise was .
Another favorite and touching memory for me was a few years ago, when I turned 80. aunt Til had asked cousin, Gary Miller, to present me with a gob hat which I still have and treasure . Apparently, as a youngster ,when Uncle Fuzz came home from the Navy wearing his gob hat, I always admired that hat!!
May the many memories of your mom sustain you bring you moments of love , hugs and delightful smiles .
Warmest regards ,
Keith, Liz and family
Comment Share
Share via: 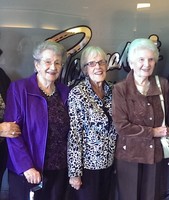 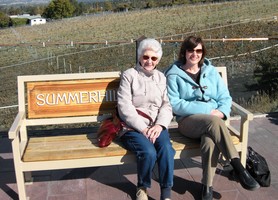