196A Tache Avenue at Hanbury Street 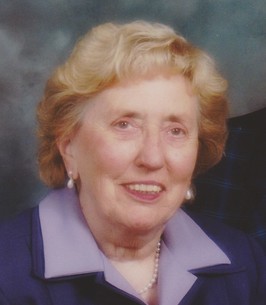 Print
Adeline Karine Kvemshagen, eldest daughter of Bella (nee Kvern) and Andrew Kvemshagen, was born February 5, 1929 on the family farm at Dahlton, SK (near Tisdale). She attended Everton School, completing high school by correspondence. Leaving home at an early age to work for Churchill Lights and Power in Island Falls, SK, she went on to complete a business course at Park City Business College in Prince Albert. This was followed with 1.5 years for the RM of Star City No. 428. While there, she heard of a position available in Ed Vickar’s Chevrolet dealership in Winnipeg. She applied, was hired, and stayed 43 years (1951 to 1994).

Adeline came from a church going family which hosted Sunday afternoon church services on their homestead. In Winnipeg, she was a member of Crescent Fort Rouge United Church since 1966 and was their first female Board Chair. She held many positions over the years on the church’s Board and was active in Circle 6-13. She was also: a member of the Schoolmaster’s Wives Association, served as treasurer of the Morris Center, and with Leonard attended many conferences of Corpus Canada.

Adeline met Leonard Schmidt in January 1969 and they were married December 29, 1969. They enjoyed many trips over the course of their marriage starting with a honeymoon trip to Germany and Norway. Other highlights included trips to: Spain, Phoenix, Sacramento, Israel, and Los Angeles. Their marriage was built on shared religious beliefs and enriched by their dual associations with both the Catholic and United Churches, attending both denominational services every weekend.

In 2011, Adeline and Leonard transitioned to the Portsmouth Retirement Residence in Tuxedo. After a series of falls, the last of which resulted in a broken hip, along with progression of Alzheimer’s disease, Adeline moved into Misericordia Place Personal Care Home in May 2015. There she benefited from excellent and loving care. She thrived and became a vital member of that community contributing in many ways but especially with her lifelong love music and singing. Other activities at Misericordia Place included sandwich-making day for Siloam Mission, choir, chapel, exercise class, birthday parties, baking, and impromptu dance parties. After Leonard’s passing last year, the loving and attentive care of Leslie Flynn helped Adeline enormously.

Adeline was predeceased by: her parents; her husband Leonard; her siblings Alvin, Delbert, Bernice, and Doreen; and her niece Margie. She is lovingly remembered by: her sister Eileen Crowell (Neil decd.); brother-in-law Joseph Schmidt (Michele); sister-in-law Helene Flynn (Jim decd.); cousins Virg (Verna dec’d), Rosemarie (Fred decd.), and Art (Lorraine); along with many nieces, nephews and children of her cousins including: Kevin, David, and Tracie; Judy; Brent and Patti; Terry and Leslie; David and Lori; Jason, Chris and Kathy; Stephen, Joanne, Matthew, Ryan, and Kevin.

We encourage you to share any memorable photos or stories about Adeline. All tributes placed on and purchased through this memorial website will remain on in perpetuity for future generations.

Provide comfort for the family of Adeline Karine Schmidt (Kvemshagen) by sending flowers.
Send Flowers
next page >>
Page 1 of 0
Share
×

Thank you for sharing!

Provide comfort for the family by sending flowers.

Or use your email:

Provide comfort for the family by sending flowers.

Connect with families at their time of loss. By subscribing to email updates, you will receive two daily updates containing all new stories, photos, candle lightings, condolences, and more.

196A Tache Ave at Hanbury St