To share your memory on the wall of Bernhard Thiessen, sign in using one of the following options:

It is with heavy hearts that our family announces the passing of beloved husband, father, brother, uncle, grandfather, and great-grandfather, Ben Thiessen on February 28, 2021, at Riverview Health Centre, at the age of 84.

Ben is predeceased by his wife of 52 years, Myrna (nee Holmberg); his parents, Abram A. and Maria Thiessen, and 10 siblings.

Ben was born on July 15, 1936. He spent his youth in the Rhineland area of Manitoba. Later he moved to Winnipeg, where he met Myrna while working at The Royal Alexandra Hotel. Ben and Myrna were married on September 29, 1956, in Minnedosa and started their family in Winnipeg. Throughout his life Ben worked with his hands, using his innate carpentry skills, designing, creating, repairing, restoring. Skills that brought much joy to his children, remembering the many times he chose to create gifts with his own hands. Each summer in the 70s/80s the family would travel Canada/U.S. in a camper he custom-made; an old Eaton's delivery van which he fashioned into a home on wheels. Creating memories yet again. We will remember his many hobbies;  making music, model train sets, painting sceneries, gardening, family gatherings, and visits to the Mennonite Heritage Museum. Ben also served as a valued member of the military, holding an MP designation and driving for the Lieutenant Governor.

Ben lost his first wife, Myrna, in 2009, but found love again with Mary. They married on March 12, 2011. The family is grateful he shared his remaining years with her, she made him happy and was by his side.

Ben was a committed Christian, who loved God and loved the church community. A commitment his parents instilled in his youth.

The family would like to thank the hospital staff and all who reached out over the last few months. A Celebration of Life for Ben will be held at a later date. Condolences can be left at richardrosin.ca

If our love could have kept you here, you would still be with us. One day we will hold hands and embrace again. Sleep in peace.
Read Less

To send flowers to the family or plant a tree in memory of Bernhard Thiessen, please visit our Heartfelt Sympathies Store.

Receive notifications about information and event scheduling for Bernhard

Print
The family plans to hold a Celebration of Life in August. Please sign up for Notifications (Above) that will let you know when the time has been set.

We encourage you to share your most beloved memories of Bernhard here, so that the family and other loved ones can always see it. You can upload cherished photographs, or share your favorite stories, and can even comment on those shared by others.

Paul and Heather and family sent flowers to the family of Bernhard Thiessen.
Show you care by sending flowers

Posted Mar 07, 2021 at 09:08am
Rick Maskiw ( Room Service International Inn)
I also worked at The Royal Alexander Hotel years ago . We both ended up at The International Inn .
Ben, great Person, human being ,helping people and always a smile on his face and a joke to brighten the day .
Yes Ben we will miss you....
Comment Share
Share via:
TK

Posted Mar 06, 2021 at 05:12pm
My deepest condolences to Mary and the whole family. David and I will always be grateful for helping us when we were young. For doing favours and putting in a good word for us at just the rite time. ... I had a lovely visit with Mary and Ben at the friendly little church at the end of the street. You were ushering and greeting people like a spry young man! We had a delightful time over coffee at Tim’s , and I was amazed that you remembered things from 35 years ago that I had forgotten about! You showed me pictures of your Grandsons Graduation and told me stories from 100 years ago. What a joy and precious memory that will always be for me. You invited me in on a week that I really needed an old friend full of life. Enjoy your reward, good and faithful servant..... Your grateful friends, Trish and David Keam
Comment Share
Share via:
HS

Blooming Garden Basket was purchased and planted a memorial tree for the family of Bernhard Thiessen. Send Flowers

Paul and Heather and family

Posted Mar 05, 2021 at 04:56pm
Our broken hearts share in your grief. Ben was a beloved, gentle and kind soul who will be dearly missed. Sending our deepest condolences and love.

Paul and Heather and family purchased flowers for the family of Bernhard Thiessen. Send Flowers

Posted Mar 04, 2021 at 12:28pm
I had a nice long phone visit with Uncle Ben not too long ago. We remembered the times he would visit me in our store when ever he had the chance to get to Altona. I so very much appreciated those visits.

During our phone call, it was obvious how much he loved his family. 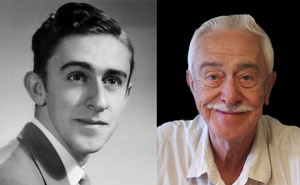