To share your memory on the wall of Craig Sinkwich, sign in using one of the following options:

Your condolence has been submitted for approval. There may be a delay before posting.

Print
After a long and courageous battle with leukaemia, Craig Michael Sinkwich, devoted husband, loving father and loyal friend passed away on Monday, December 31, 2018 at Riverview Health Centre at the age of 68.

Craig was born in Vancouver ... Read More
After a long and courageous battle with leukaemia, Craig Michael Sinkwich, devoted husband, loving father and loyal friend passed away on Monday, December 31, 2018 at Riverview Health Centre at the age of 68.

Craig was born in Vancouver on November 11, 1950 to proud parents Walter and Jean Sinkwich. The family soon moved to Winnipeg where Craig grew into a compassionate and sincere man. He followed in his father’s footsteps, working for Air Canada for 35 years.

Craig and Robin married on March 31, 1973. The two of them settled into the Fort Rouge area and began to raise their family. Craig was known as a hard worker but not to the exclusion of the more important things in his life - his God and his family. He raised two children, Jennifer and David. He spent time teaching his kids practical skills but many memories were also made traveling together as a family and taking day excursions to the beach or through the bicycle trails at Assiniboine Park.

Craig had a passion and a real gift for music. He took particular interest in the guitar and taught himself to play when he was a teenager. From that time forward, he always enjoyed unwinding with and performing his music.

Over the years Craig also loved to restore old cars, make homemade pickles and do crossword puzzles. Those who knew Craig also recognize that he was somewhat of a collector. As such, he was not difficult to please. You could always bring a smile to his face with the smallest gift: a t-shirt to add to his collection. But he would proudly specify that it had to be XL.

In 1987 Craig and Robin began a study of the Bible with Jehovah’s Witnesses. As spiritually minded people, they found great comfort and joy in what they learned about the truth found in the Bible. As a result, Craig dedicated his life to the service of his Creator, Jehovah God, and was baptized on February 9, 1991. Especially from that point forward he set a fine example in living a life of self sacrifice and using his time and energy to serve Jehovah wholeheartedly. Craig was a member of the Fort Rouge congregation. He had a reputation for being both kind and generous. He was often found helping others. Whether that meant moving someone to a new home, teaching them how to play guitar, hosting them for a meal, fixing their car or chipping ice from their entryway - he was always eager to assist.

Craig loved to be punctual; or perhaps more specifically - he loved to be early. He was often one of the first to arrive at the Kingdom Hall to greet his brothers and sisters. He gained much strength and encouragement from their company. Craig was also known for his sense of humour and unique perspective. He enjoyed making others laugh and built relationships with both young and old, sharing ongoing jokes with his friends. He loved to write emails that took the communicating of information to the level of storytelling. We will miss being entertained by such correspondence.

Two more reasons for joy in his life came with the birth of his two grandsons, Dexter and Weston. He was affectionately known to them as “Grumpa” or “Grumps”, a name he picked for himself. Spending time with them was something he looked forward to and loved to talk about.

Craig proudly shared his faith with all, including his friends and family. He was a man of great integrity right down to the end. His life, including his battle with leukaemia, was fraught with many ups and downs but never did he waver in his beliefs. He trusted that all the good he had accomplished in his 68 years of life would be treasured and remembered by his God (Heb 6:10). It was Craig’s firm belief that, if he died, he would be resurrected along with countless others to life on a paradise earth (Job 14:12-14); (John 5:28,29); (Psalm 37:10,11).

Craig is survived by his loving wife of 45 years, Robin; his daughter, Jennifer (Mick) Zuroski; his son, David; his mother Jean and his sister Jill (Ken) as well as his two grandchildren Dexter and Weston.

The family wishes to express their thanks to the dedicated doctors and the empathetic staff at Cancer Care Manitoba and Riverview Health Centre, as well as to the countless friends who have shown their support over the past many challenging months.
Read Less

Receive notifications about information and event scheduling for Craig

We have provided a digital copy (PDF) of the Memorial Program that we supply at the time of the service. To Download this file please click the filename below.

We encourage you to share your most beloved memories of Craig here, so that the family and other loved ones can always see it. You can upload cherished photographs, or share your favorite stories, and can even comment on those shared by others.

Posted Jan 05, 2019 at 02:22am
Our hearts are broken! Can’t image what it must be like to lose a husband and a father. We keep you in our prayers everyday. May Jehovah give you the comfort you need and deserve at this time. Jehovah the God of Comfort (2 Cor. 1:3-4) promises to help you through this difficult time. Can’t wait til “He will call” and CRAIG says, “ I’m Back Guys” ! - Much Love, A&E Kushniruk
Comment Share
Share via:
JA

Posted Jan 02, 2019 at 05:00pm
My thoughts are with you and your family today, Robin. Craig will always be in our hearts, more importantly in Jehovahs memory. Soon He will Call.

Joyce Adamson purchased flowers for the family of Craig Sinkwich.

Posted Jan 02, 2019 at 03:48pm
Craig was more than a spiritual brother to me, from the time Robin started studying with me Craig and Robin were like my own real family. And what a brother Craig was, always ready ti lend a helping hand, generously give from his garden, but most of all I will remember his booming laughter and how he always, always made me laugh. I will carry the sound of that laugh in my memory til we meet again in Jehovah’s wonderful, righteous new world with no more sickness, no more sorrow and no more death. (Rev 21:3,4) Warm loving hugs to Robin, Jennifer, David, Dexter, Weston & Jean.
Comment Share
Share via: 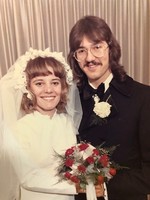