To share your memory on the wall of James Bracken, sign in using one of the following options:

Print
On Sunday, June 23, 2019, Jim Bracken, loving husband and father of five children, passed away at the age of 90.

Jim was born on April 3, 1929 in Calgary, Alberta to George and Jean (Baillie) Bracken.  He had a very successful career in... Read More
On Sunday, June 23, 2019, Jim Bracken, loving husband and father of five children, passed away at the age of 90.

Jim was born on April 3, 1929 in Calgary, Alberta to George and Jean (Baillie) Bracken.  He had a very successful career in sales and completed his career as an entrepreneur and part owner of Coldstream Products of Canada.  On July 2, 1955, he married Jean Kindratsky in Penticton, BC and in 1962 they moved to Winnipeg.

Dad was a man of many interests and an avid collector - starting with stamps as a child and progressing into his love for music, reading and photography to name but a few. His engaging smile and inquisitive nature led him to have an extensive and diverse group of friends.  He was highly committed to numerous philanthropic and fraternal organizations and always believed in giving back to the community he lived in.  Jim had a smile for all he met, a firm handshake, and a story or joke to put a smile on their face as well.

Jim was preceded by his wife, Jean (2004) and several of the large Kindratsky family he married into.  He is survived by his children and grandchildren, Rick (Gail) and Alexander of Calgary and Candice Smart (Zach) of Cincinnati; Rob of Bolton, ON; Brenda Bracken-Warwick (Ken) of Winnipeg; Karen Smee (Doug) and Calum and Moira of Winnipeg; and Bruce (Monica) and Madeline and Colin of Richmond Hill, ON and his sister, Marilyn Hewitt (Bill) of Calgary as well as numerous relations of the Bracken and Kindratsky clans.

Our family would like to thank Dr. Brian Sharkey for the excellent care he provided to Dad over the last 30 years and for his guidance and compassion. We would also like to thank the staff on the 4th floor at the Victoria Hospital.

In lieu of flowers, donations may be made to the James A. and Jean Bracken Fund at The Winnipeg Foundation, 1350-1 Lombard Place, Winnipeg, MB R3B 0X3. Online donations can be made at http://www.wpgfdn.org/JamesBracken
Read Less

To send flowers to the family or plant a tree in memory of James Andrew Bracken, please visit our Heartfelt Sympathies Store.

Receive notifications about information and event scheduling for James

We encourage you to share your most beloved memories of James here, so that the family and other loved ones can always see it. You can upload cherished photographs, or share your favorite stories, and can even comment on those shared by others. 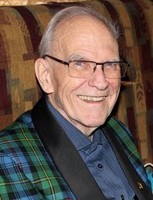